The self-titled debut CD by international progressive project Relocator will be released in November 2009.

Influenced by both modern and classic artists like UK, Planet X, Rush and Allan Holdsworth, Relocator have developed their own purely instrumental style. After a transformation from an unstable "full" local band into an international project, Relocator are finally about to deliver their long-overdue first album that is as uncompromising in its progressive approach as it is melodic and accessible.

Adding his distinctive keyboard style to the Relocator debut is special guest star Derek Sherinian. Derek played with rock legends Kiss and Alice Cooper even before really stepping into the spotlight during his four years with progressive metal titans Dream Theater. More recently he has become known for a string of exciting solo albums, each featuring some of the world's most famous guitarists, and for his live and studio work with Billy Idol and Yngwie Malmsteen.

Instead of just contributing a few guest solos, Derek Sherinian has recorded all keyboard parts for the album. Derek's experience with the self-proclaimed "sickest instrumental band in the world", Planet X, makes his style a perfect fit for the music. "We are thrilled to have Derek's amazing array of modern keyboard sounds featured on our album!", says guitarist and main composer Stefan Artwin. "The original 2008 album that never got finished would have featured just a few Derek Sherinian solos over tracks with MIDI keys and mostly synth bass. So when we decided to re-approach the material, getting Derek involved more extensively was one of the steps we took to take the music to a new level."

Another step was to enlist the talents of Dutch drummer Frank Tinge from the band Superbug (http://www.superbug.nl). "We wanted someone who could not only play this kind of challenging music with its twists and turns, but who would also show some real enthusiasm for our musical style", says bassist Michael Pruchnicki. "Frank was my first idea and he turned out to be the perfect choice!"

Self-described "rock violinist" Bartek Strycharski became the last addition to the project. "With Frank and Derek on board the music became heavier, so we wanted to have some acoustic elements as a balance to all the spacey progressive parts", Pruchnicki explains. "One idea was to have Frank play some African percussion on one track. The other was to add Bartek's electric violin as another expressive instrumental voice. He's one of the most talented and natural musicians I have ever met and his playing really added a new dimension to our music."


The self-titled Relocator debut will be available directly from the band as CD or digital download, other distribution channels will be announced soon.

A five minute sample medley from the upcoming Relocator debut album is now available on these websites:
http://www.myspace.com/relocatorproject
http://www.relocator-project.com (for the medley in better audio quality!)

A second medley showcasing the talents of electric violinist Bartek Strycharski will be released later this month.
Zum Vergrößern anklicken.... 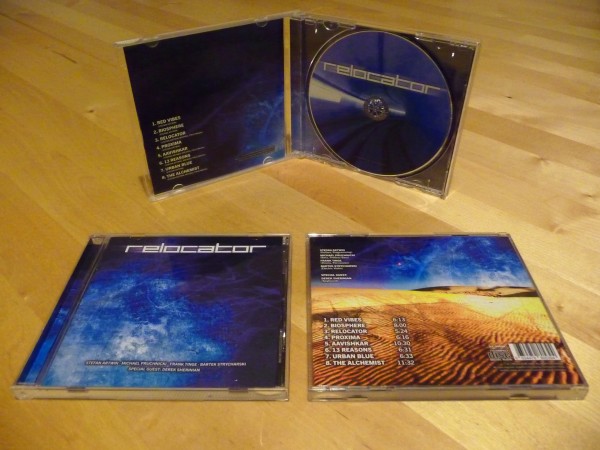 Ach ja, bei den beliebten Dutch Progressive Rock Pages (DPRP)
hat unser Album übrigens eine großartige Kritik bekommen:
http://www.dprp.net/reviews/201013.php#relocator
"every track is of outstanding nature"
"I could go on and on with many superlatives about this music"
"Conclusion: 9 out of 10"