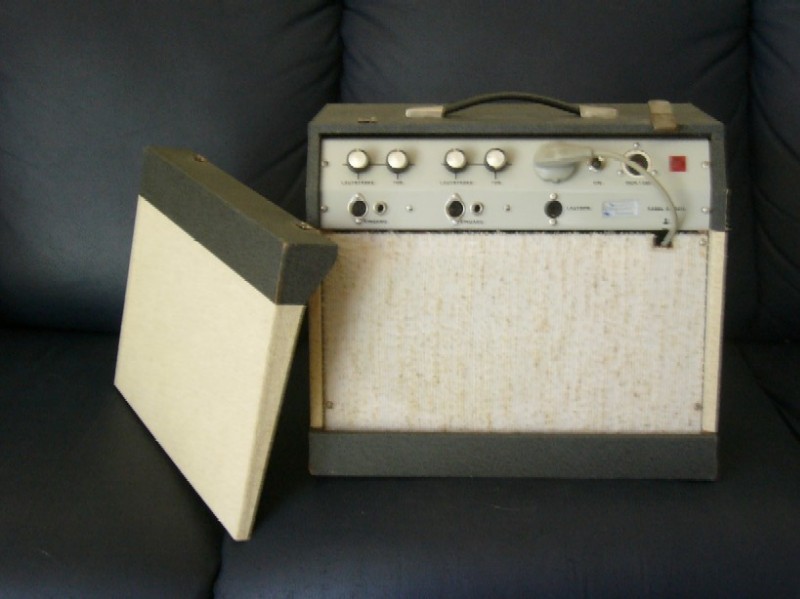 Excuse me for writing in English,but it´s simply more convenient to me than German these days.

Anyway. Searching for more info on Suprem amps i ran into this thread via google and it just so happens that i´m the one responsible for the modified Suprem Club per above.
I work on tube amplfiers for a part time living,and modify the living crap out of them every so often. Hence the Suprem Club of mine.

As for the build as i took delivery of it,might be of interest to some of you guys seing the amps origin...

These amps are what´s known as hardwired from the onset. Ie;the amp doesn´t even sport a tagboard or eyelet board (a´la Marshall or Fender). All in all this makes for a VERY sturdy built amp,and in turn the "monocoque" solution of the actual cab in itself in turn makes for a very light,very powerful and well designed amplifier.
Now.as far as i know Suprem made amps from the -50´s up until the -80´s and the early models - like the one in the Youtube clip of mine,look way different than the later offerings.
Apart from the Club i´ve also modified the living daylights out of its smaller broter,the Piccolo.

When it comes to the actual circuitry by me it´s basically got nothing to do with the stock amp. Not one yota. The Club is one of those that was delivered with a GZ-34 tube rectifier and as such delivers ample power.
B+ voltage is around the 440VDC mark under full load in idle making for a rather powerful,VERY lightweight,combo. The whole thing weighs a mere 14kg!!,and makes for an easy 50 watts served the amount of signal i´ve modded it to do.
The more common EZ-81 rectified units were quoted at 24 watts in turn and as far as i know the transformers are the same for both the EZ-81 model and the GZ-34 model.
Ie; making ANY of these amps into twin EL-34 powered screamers is certainly doable.

Stock it uses an oddity or two though. For instance..these are ultralinear powerstage amps. Commonly abbreviated UL. Just,in the case of these Suprem amps they don´t do so the "normal" way but instead uses a separate winding for the UL hookup. (Compare for instance Fender 75,Fender Bassman 70 et al).

Chassis,the actual metal parts of it,is just folded aluminium sheetmetal. The reason it gets to be so strong as a construction is due to the rather complex design of the cab in itself.

For modern day and era rocknroll use the main thing that absolutely sucks with them is the twin speaker install. The stock speakers are bright,shrill and just basically nasty sounding.
In the Club of mine they´re (there´s two of them stock) replaced by an Eminence Cannabis Rex of 8 Ohms. Works wonders in my opinion.

Sadly enough these older German made tube amplifiers are a sort of hidden treasure still. As i do LOADS of amps i see them all,and that includes fabled amps like old Deluxe Reverbs,Plexis,Laney Klipps and what have you not.
Me on the other hand have had my head into many a German made early -60´s to late -70s amps and...here´s the deal... From a pure construction point of view they are as a whole WAY WAY WAY better amps than their counterpart british and US made siblings.
The Suprems i´ve worked on have all been REAL nice amps and i´ve in fact just bought me yet another one. This time a later,way more ugly looking,Suprem Luxor 40.
In essence what´s to be the later incarnation of the Club. Haven´t taken delivery of it yet so that remains to be proven.

I do work on many an old German amplifier though and i just finished.....

...turning this old -66 vintage Schaller KV-50,all tube,into a 3 channel rocknroll amp. Again a hardwired amp and again an amp of REAL high build quality. I mainly picked it up to get to know the rather special Schaller echo setup,but as it turns out i´m out of luck as ALL of the 5 pieces of Bogen UK-100 tapeheads were shot and it seems about impossible to get replacements.
If all else fails i´ll convert it from a drum echo into a regular tapeecho instead.

Then in turn i just finished another German made old warrior into a rocknroll amp from the deep end of the pool just the other day...

A REAL early Hohner MH-25. Early as it sports regular ECC-83 tubes for the entire front end and phaseinverter,vs the newer ones that use ECC-808´s. An amp that is friggin liquid gold with a P90 through it´s now EF-86 entry channel! That thing there OOOZES of rocknroll!

..and many more... Like old Klemts,Austrovox,Dynacord and what have you not.

I guess what i´m saying is that don´t you guys underestimate the quality of your domestic amps! They might not SOUND up to todays standards,but see..that can be handled by someone who knows how tubes work and need to be setup.
What they DO offer though is great build quality at coffee money..and as such make for fantastic bases to build something of your own out of-if you don´t mind straying away from stock.