Thanks to Donpaul McAllister for providing this article and his effort in revealing this issue, gathering information and finally getting Vox to fix it for new production series. Also thanks to all other helpful people at the Gear Page and Vox forums. 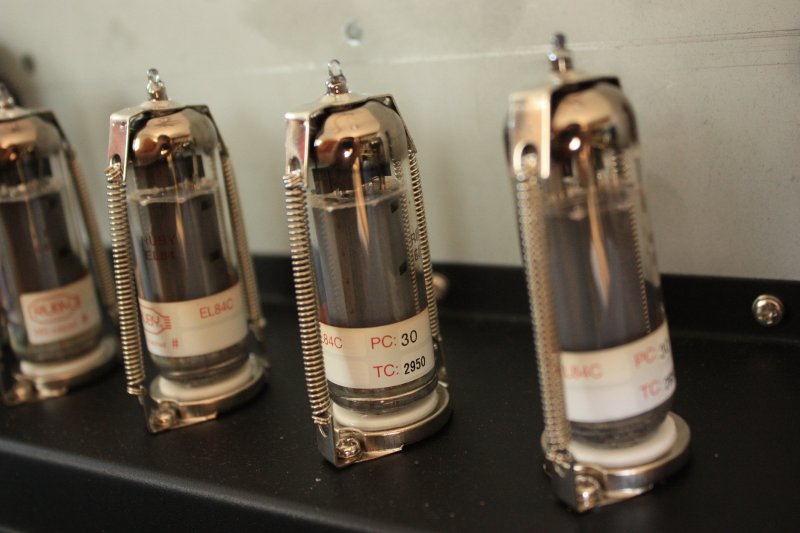 This article provides a fix for a known issue with some (older) models of the AC30HW series. This issue has been acknowledged by Vox and listed in the Vox service updates (available to authorized repair centers) as "modification to prevent noisiness when a brand of EL84 output tubes are used that are any other than the original Ruby brand of tubes" (info provided by authorized tech). The update has been tested by Vox and requires no additional parts.

The issue was first found when trying to use different EL84 tubes besides the stock Chinese 'Ruby' branded tubes. We specifically tested with JJ El84 tubes from different sellers. This is the result, the first half of this sound-file is with stock tubes, the second half with the JJ's: Sound Sample 1

The issue:
There are four specific resistors placed on the board. This location is not where these resistors should be in order for the amp to perform reliably with different tubes. 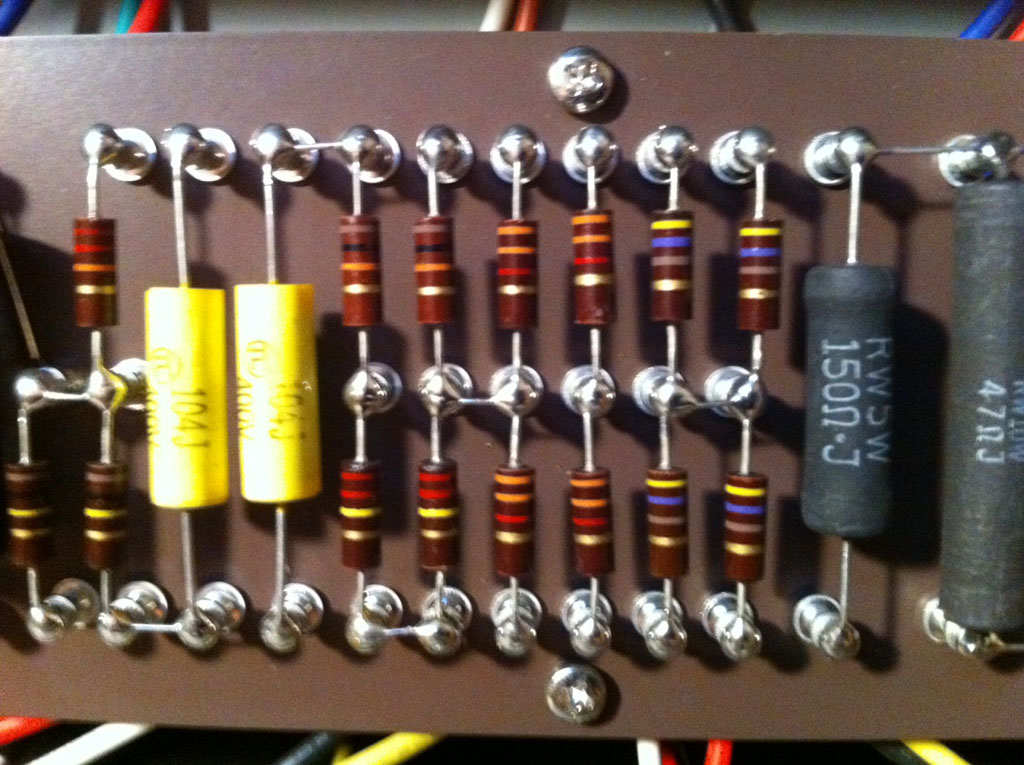 The fix:
The fix is simply moving the 'grid stoppers' (Resistors) off the board and to pin 2 on the EL84 tube sockets. Here are the before and after pictures, please click on pictures to enlarge: 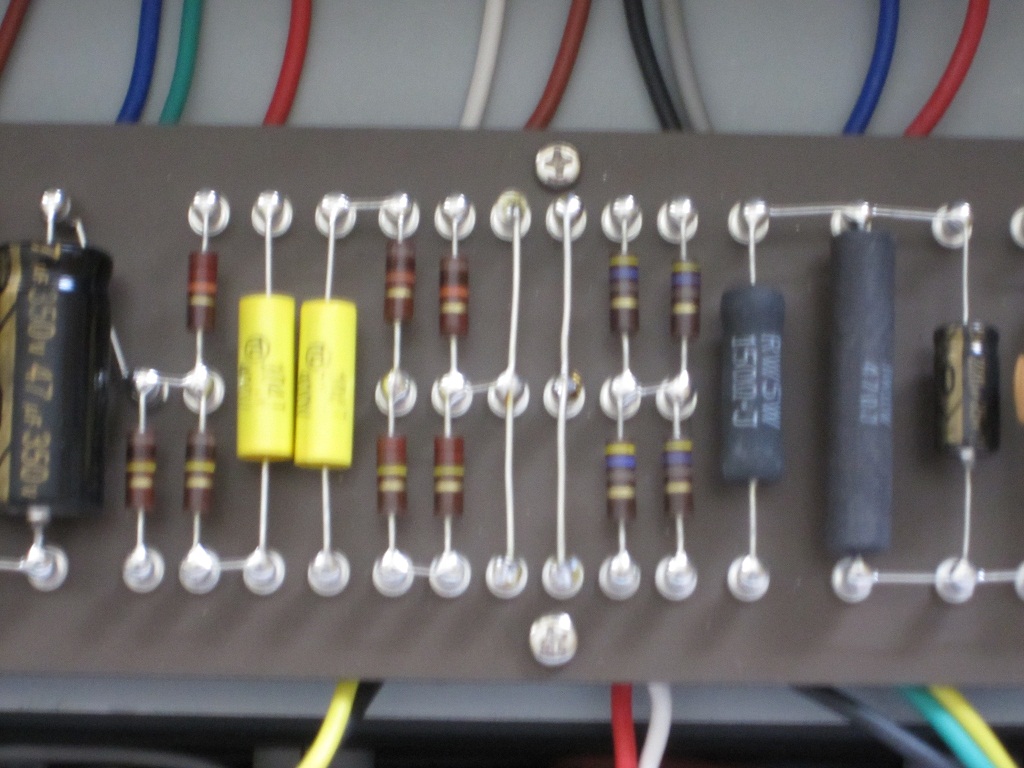 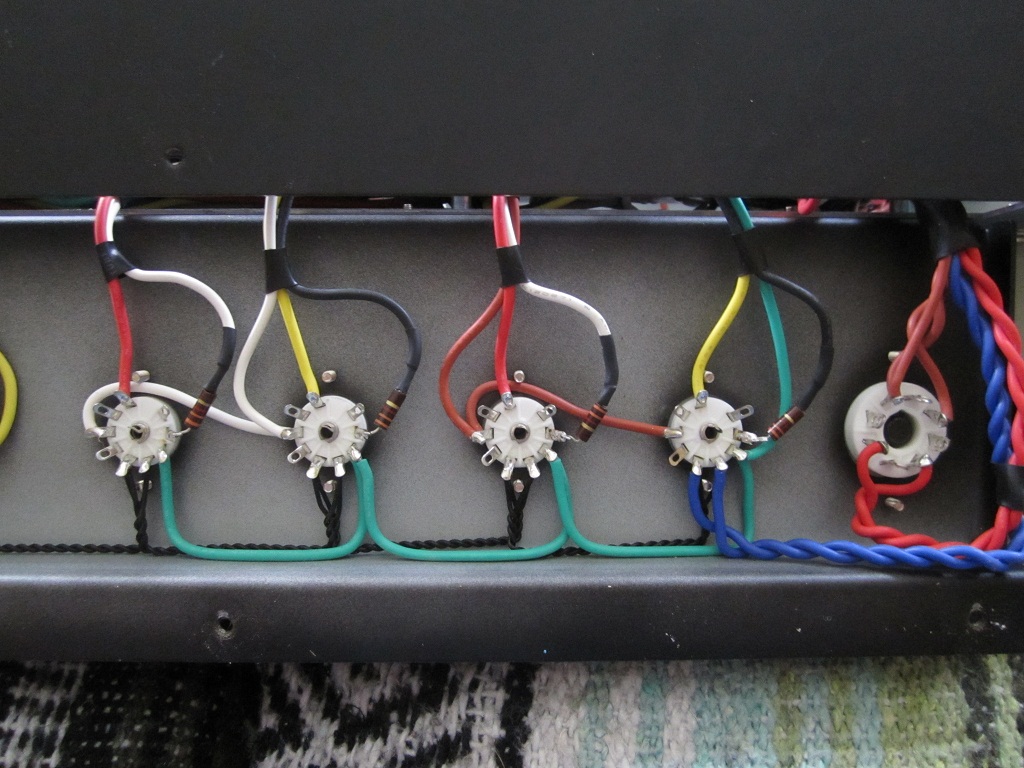 After completing this change, this is the amp using JJ tubes (no more issues!):
Sound Sample 2 (thanks zacha1)

Final comments:
Outside of this one design flaw, the construction of the amp is very good and the handwired work is excellent. Vox responded quickly on the official forums, were very nice to deal with and covered the issue under warranty, offering to pay shipping cost for anyone without a local authorized service center. The issue has been successfully fixed in current production.

Great article…und vielen dank fuer dem besonders gute Information hier. I came across Donpaul’s site, this site and a few others that address issues with the AC30 HW series (I purchased AC30 HWHD head new a few months ago). My serial # is in the mid 100s and still has the resistor issue listed above. It also has an excessive level of baseline hum. Above the din of this baseline hum I love what I’m hearing, but the hum is unacceptable as it stands for recording (especially when compression is applied to lower volume guitar riffs/fills). I’ll list some of the sites that have what appear to be the fixes for this hum issue and other issues.

Also – below is a list of the stock tubes that came with my AC30 HWHD…the vox website makes the claim that my AC30 HW series is “Fitted with matched Ruby Tubes that provide extended dynamic range”. So…apparently it’s ok to claim that – when only two of the eight tubes are actually Ruby tubes…the rest are Sovtek’s, which based on their claim and the fact that they are Sovtek’s apparently means that 6 of the 8 tubes do not “provide extended dynamic range”

Here is the article that describes the exact issue my AC30 HWHD head has. When you turn the Volume knob from max to 1 o’clock you don’t hear much difference in the hum level, but turning the knob from 1 o’clock down to nothing actually increases the baseline hum…and this baseline hum is there with both Normal and Top Boost Volume controls turned all the way down and the Master turned completely off – and nothing plugged into the guitar inputs. This article essentially says that it’s an issue with the placement/orientation of the wiring/leads going from the turret board to the tube sockets.

“Does your amp have an annoying low level hum that actually gets quieter when you turn up the volume controls? This is a “lead dress” issue… ”

tone-lizard also has some great info on resolving AC30 baseline hum issues…
HINTS AND ‘TRICKS’ ON REDUCING AC30 HUM
Here are a few ‘tricks of the trade’ aimed at helping you reduce the ‘hum’ in your AC30 to a much lower level. Each amplifier is different, so treat each ‘patient’ as an individual. That said, these ‘tricks’ do work well separately or in tandem.
• Determine if the hum is a filament winding imbalance. If so, install two 100-ohm/1-watt resistors from each filament tap to ground. The most convenient spot is at the AC mains indicator.
• A ‘shield’ directly below the ‘Cut’ control often helps. The coupling capacitors from the phase-inverter are right here, and are susceptible to stray (induced) magnetic fields. I have seen a ‘bracket’ that had been fabricated to fit over the ‘Cut’ control (thus eliminating the need to drill holes and ‘mount’ the shield); this is simple, and does work.
• Try different output tubes. Here, matching (or ‘unmatching’ just enough) can make the difference. This isn’t a great ‘cure’, since your tubes will age ‘differently’, and you’ll eventually have to go through the whole process again, but it sure helps in the recording studio. On a live stage, most players seem to ‘put up with’ a little bit of hum.
• If the amplifier has a grounding problem, you can try to ‘find and fix’ the offending ground connection. A ‘quick fix’ until you do is to have the ‘Normal’ volume control at about the ‘1 O’clock’ position.

Hi JohnT,
thanks for your great info! If you like, you could put up an article about the hum issue here on the site?!
cheers

It’s been a while…I replaced the stock Sovtek EL84s (again not “Ruby’s as Vox claims to be the stock tubes – my AC30HWH’s stock EL84s were ALL Sovteks.) …used a matched quad of 4 x NOS Tesla EL84s – huge difference. This totally removed the basline hum/noisefloor issue that I was experiencing – so this solved the problem for me…and I had no issue with the grid stopper / resistor issue mentioned above (this fix wasn’t required for my specific AC30HWH and these Tesla EL84s). Hope this helps somebody out there. Cheers.

I also have a Fender Deluxe Reverb Re-issue that I was having hum/noise problems with…again, I replaced the stock power tubes (2x6v6GT) with NOS 6v6GTs and the hum/noise problem went away…I sense a pattern here
Happy Hunting my friends…

This article was a life saver. I just bought a used Vox AC30 HW head from a guy in Tennessee and it showed up with the 30 watt mode totally jacked and the hot mode on the bright channel clipping very strange. At first I couldn’t believe it was just a matter of moving the resistors closer to the tubes, but after I heard your sound clip I knew it was definitely the same issue. Thanks so much for posting!!

I opened my AC30 up due to some loud intermitent type noises coming from the bright ch. on 30watt mode. My inspections found a burnt out resistor right next to to screen grid group. (top right to be exzact) My question is what are values of the resistors to the top right of screen grids pictured in the 1st pic???