After extensive testing and comparisons of various effects pedals and amplifiers by Jimmy and his technician we were asked to build an effects system that would operate with equal efficiency in every country in the world and incorporate all Jimmy's chosen effects and route the signal to several amplifiers.

Most of the effects had so called "true bypass" footswitches and we decided to investigate whether we could use this system with the entire collection of effects and amps as so many manufacturers offer the "true bypass" as the ultimate type of switching.

Our findings were that the "true bypass" did NOT create unified signal level or tone from the guitar for the following reason:
Take for instance a 5m guitar cable linked to six pedals, each linked by a 1m cable, and then on to the amp by say a 15m cable. If all pedals have "true bypass", and are off, then the total cable length hanging on the guitar output will be 25m. This will cause a huge loss of tone and signal level particularly if the guitar is a vintage type with low output. The amp volume is then turned up and the treble control increased to compensate for the losses. The inherent background noise now increases by the amount of the gain and treble increase and is usually, in my experience, too bad for serious work. If one of the pedals is now switched on, then it's high input impedance (and usually low output impedance) will buffer the output cables from the guitar; the signal level and treble content will rise due to the removal of some of the load on the pickups (i.e. 6m instead of 25m of cable). If that pedal was for example a chorus or delay, devices which are usually unity gain, then the overall signal level and tone will vary each time an effect is added...not a very good idea.

The "Pete Cornish System", which we devised in the early 70's, is to feed the guitar into a fixed high impedance load, which is identical to the amp input, and then distribute the signal to the various effects and amps by low impedance buffered feeds. This gives a constant signal level and tonal characteristics from the guitar, which do not change at all when effects are added. The proof that this works are in the recordings of our clients: Roxy Music; The Police; Queen; Pink Floyd; Bryan Adams; Lou Reed; Dire Straits; Paul McCartney; Sting; Judas Priest; Black Sabbath....

For Jimmy's stage system, we fitted additional high impedance pre-amps between each effect to further isolate each one from the next in line. We also provided two send/return circuits so that new effects could be added at a later date and another send/return to Jimmy's Echoplex. The four isolated outputs to the stage amplifiers each had a line driver fitted to overcome the very long across-stage cables (total length 64m).

To ensure that the sound of the guitar and effects would remain constant at each venue across the world we designed "super regulated" dc power supplies to suit both the effects and the audio frequency pre-amps. Each effect and pre-amp had it's own isolated dc feed which we know helps to prevent cross-leakage of effect signals: for example upper harmonic distortion products can leak into clean chorus circuits through a common power supply if this precaution is not taken.

Jimmy was very pleased with his "Pete Cornish Guitar/Effects/Amps System" and it has proved most reliable and convenient to set up, as all the effects and routing are permanently in the correct
order and it is so simple to "just plug in and play..." 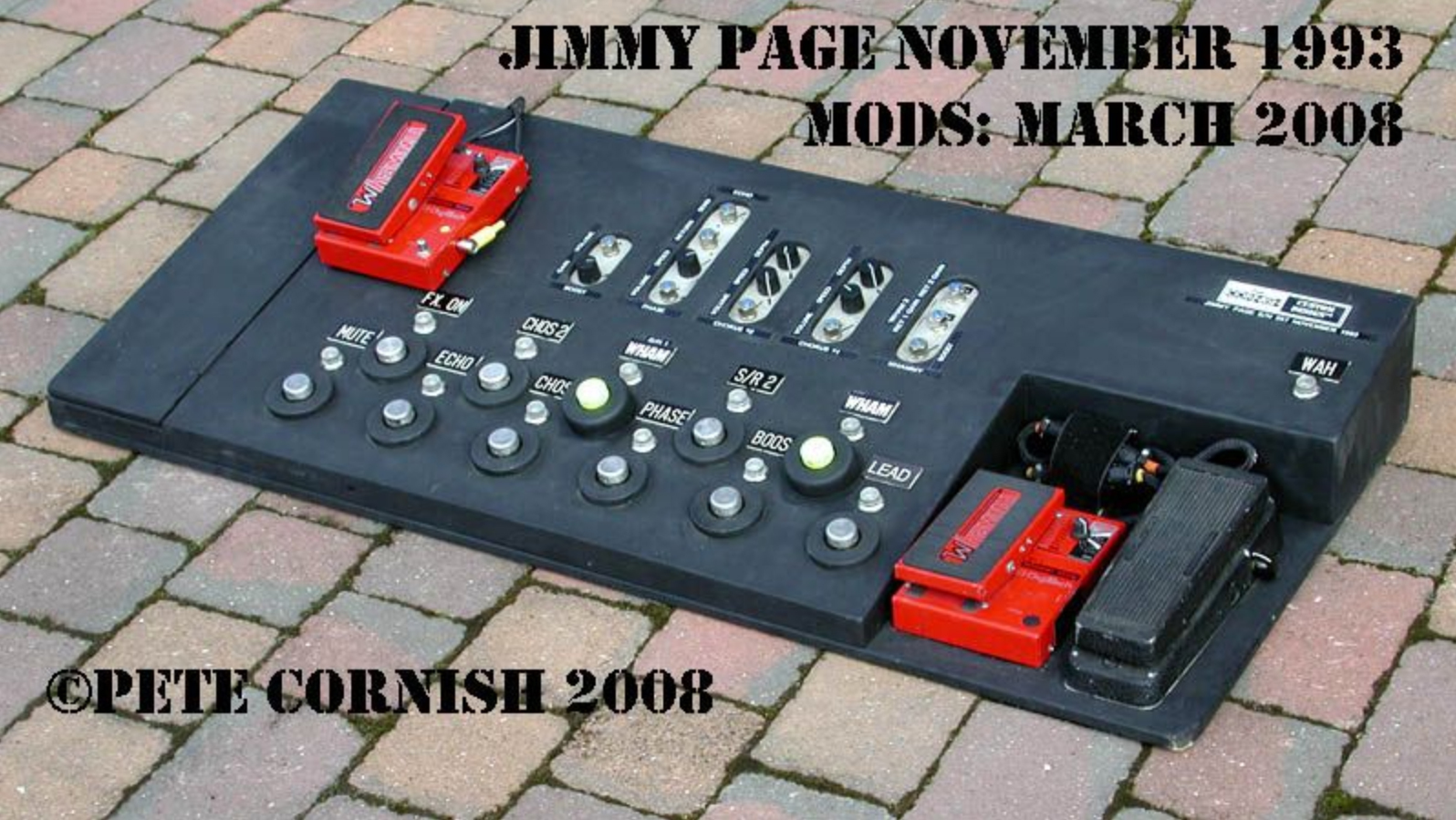 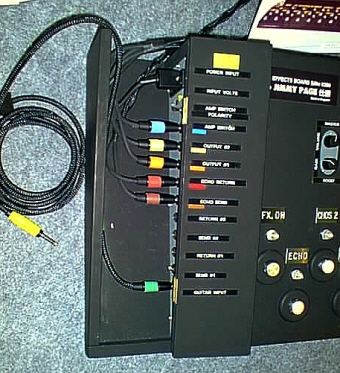 …and Line Driver (off stage) – a box boosting the input signal without changing frequency response (so, causes more gain, but no changed sound, no distortion, no overdrive, no whatsoever; just louder, that’s it; one can use it to such an extent that your sound becomes a fundamental lead sound without any change in frequency response; just an example: https://www.thomann.de/de/mxr_mc401.htm?sid=1d5773bd112447dd8be0983e381d69fa ) – via Pete Cornish HD Guitar Cables

Local and Remote Mute All Outputs