This article provides information all related to speakers. While being the last limb in your signal chain, speakers do have a significant impact on your tone which may be even higher than the impact of tubes. While a speaker exchange is comparatively easy to do, it may be pricey, depending on the speakers.

Break-In
Speakers need some time to break in. When speakers are new and not broken in yet, they may sound too bright and harsh. After a longer time being played, however, they usually smooth up. The break-in time depends on the particular speaker, the kind of music and how often you play it.

Speaker Overview
Indeed, speakers heavily contribute to the final sound of your guitar amp. There is a lot of discussion on which speakers may be the best choice for the AC30. However, we have to agree that people are different in their musical taste, equipment, requirements, so to say in many aspects. Therefore, you should leave any final decision to your ears and mainly consider this article and our given sound samples as a fingerpost providing a basic orientation (the samples are recorded with AC30HW2 + Fender Telecaster, all with same settings). 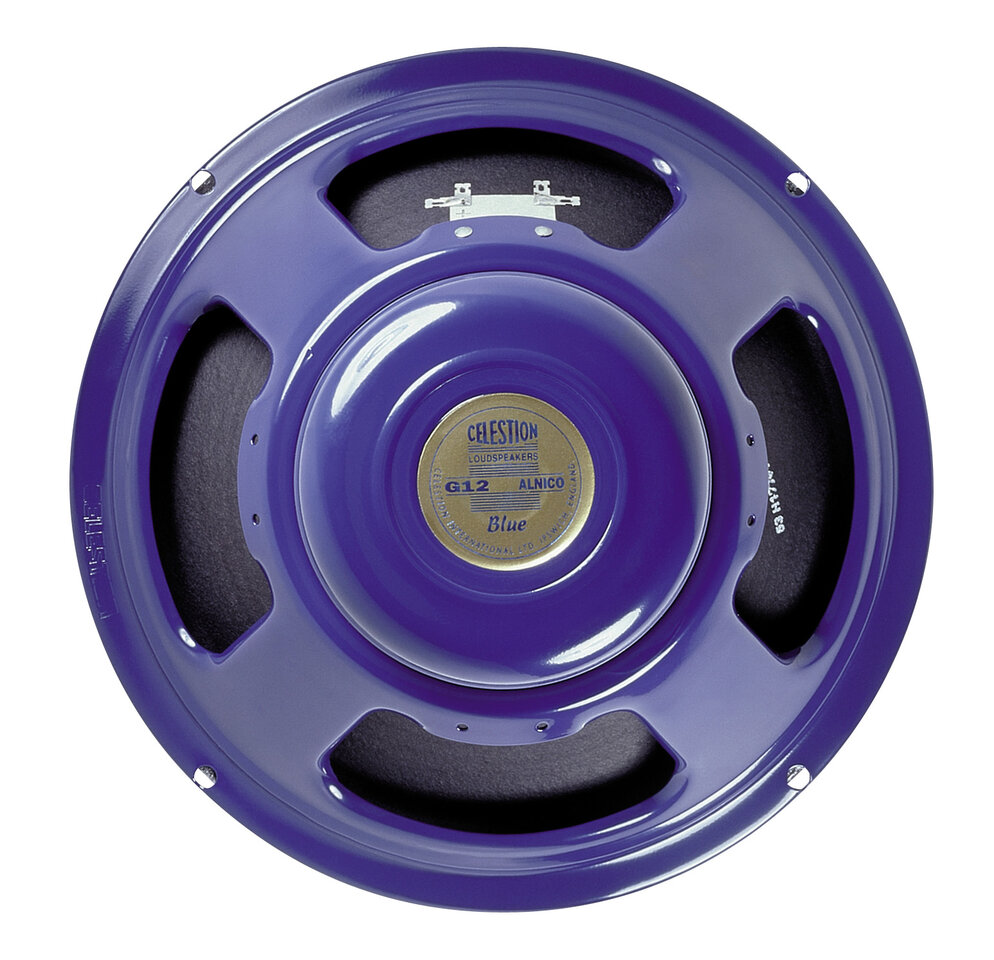 No other speaker has been associated more often with the Vox AC30 than the Celestion Alnico Blue, also known as “Blue Bulldog”. In fact, the Alnico Blue was the first dedicated speaker to be exclusively used in a guitar-amp. In a nutshell, the Blues are famous for their magical chimey, shining and shimmering tone, especially at clean and soft crunch sounds which is home territory for the AC30. The small wattage (15W) also makes them a suitable choice if speaker breakup is desired. A lot of people agree that these are the ‘most classic’ AC30 speakers. The Blues are used in all X-series AC30 models (like AC30C2X, AC30HW2X, etc.). However, not all series are equipped with original Celestion (for instance, CC series has chinese copies). 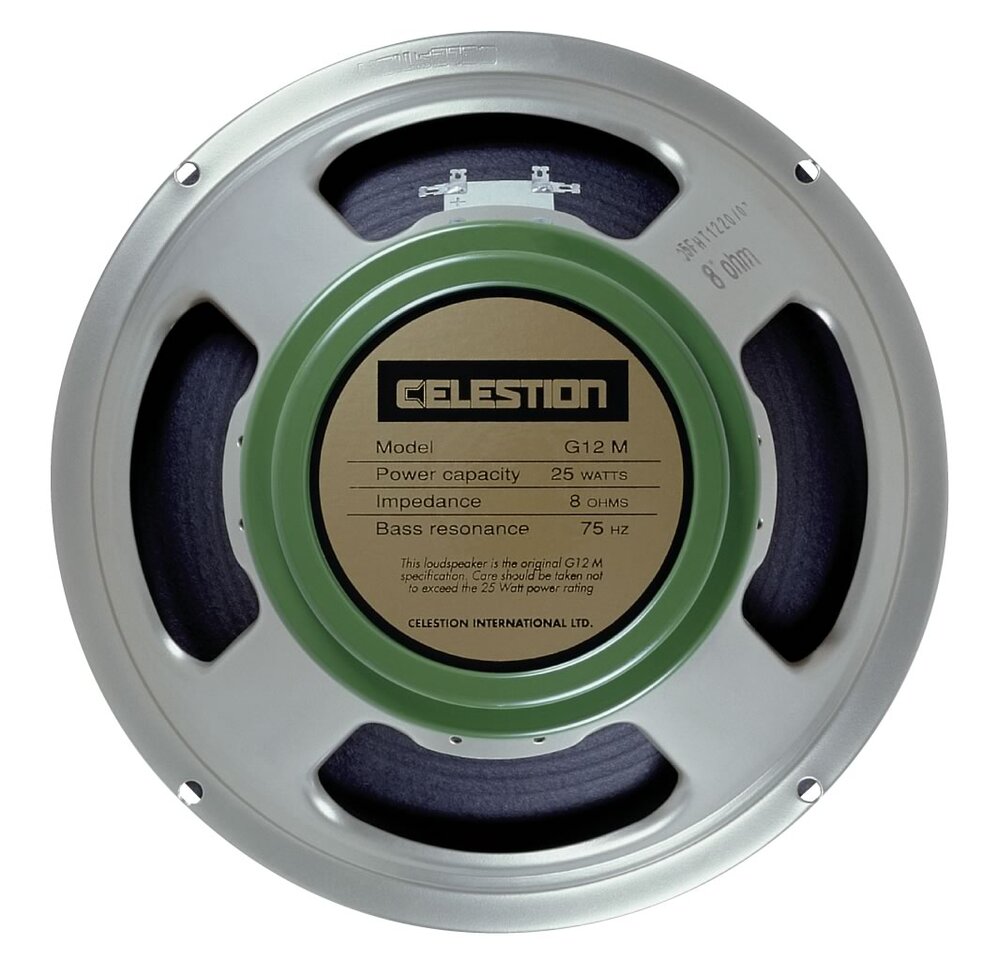 The next big classic speaker used in AC30s is the Celestion Greenback which uses a ceramic magnet. Compared to the Blues, the Greenbacks sound seems to be less chimey but more beefy, solid and it is often described as providing a wooden type of tone. The Greenback is a very balanced speaker that is capable of legendary classic rock tones. Especially when it comes to overdriven sounds, these speakers are a good choice if you want to push your AC30 into a more marshall-flavored territory. There is a lot of discussion about Blue vs. Green along the boards. In fact, both are great speakers for the AC30 and the discussion is like comparing apples and oranges – neither is better, they are just different and it depends on your personal taste. A Greenback also makes good mix-up with a Blue. These speakers come in stock with the current normal (Non-X) AC30-models. (like AC30C2, AC30HW2, etc.). A recommendable alternative to the classic Celestion Greenbacks are Tayden True Brits. 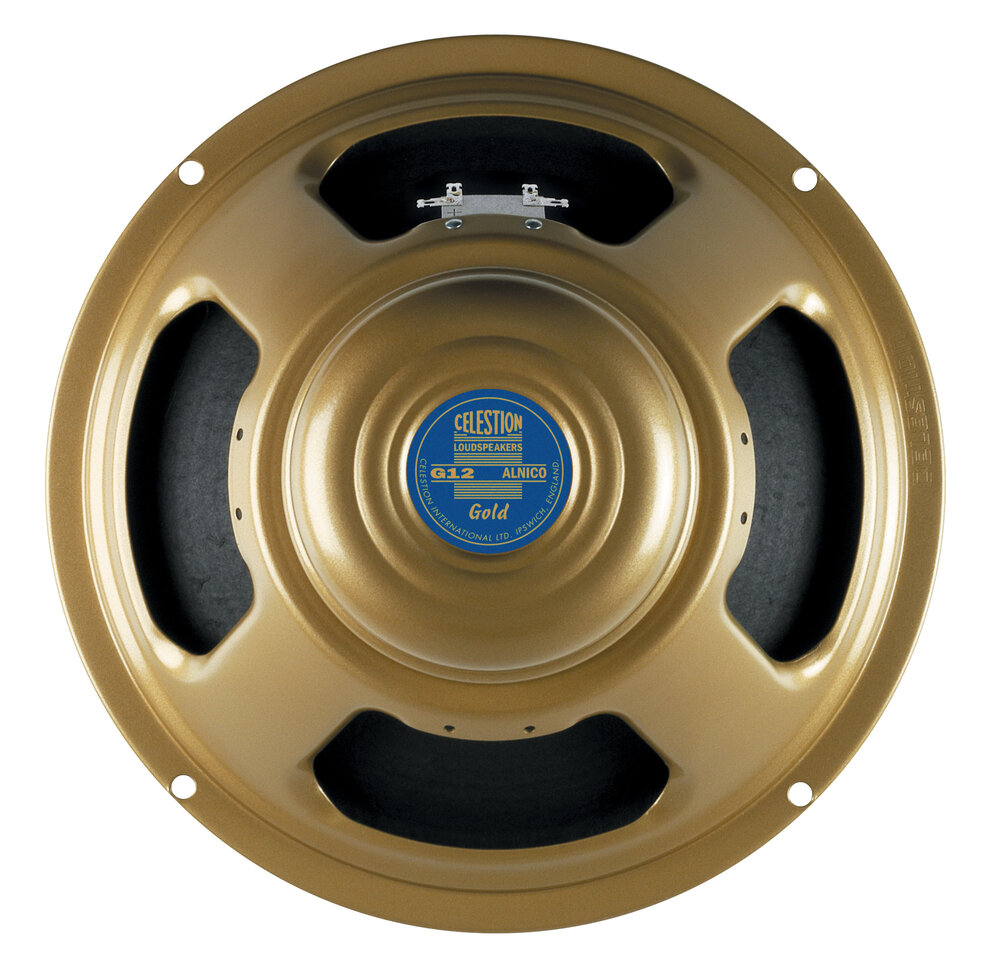 The Alnico Golds were designed to maintain the sound of the blues but at a higher power rating (50W). Fortunately, this experiment has succeeded and the Golds turned out to be very cool speakers. Compared to the Blues, these speakers are a bit less present in the mids but they offer a stronger and tighter bass response while providing a very articulate, clear and musical sound at the same time. The higher wattage and improved bass response can be an advantage, especially if it comes to heavier distortion (like when pushing the AC30 with pedals).
Sample Celestion Alnico Gold: 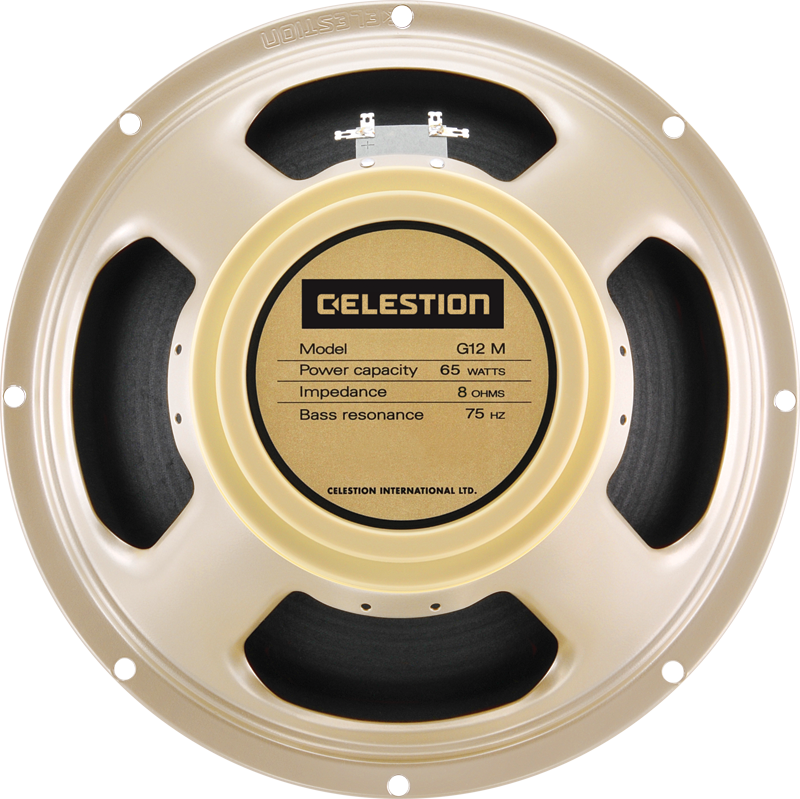 The Celestion Creamback is a higher powered version of the Greenback. Like in the relation of Gold vs. Blue, the Creamback provides more bottom and headroom in comparison to it's original Greenback. In our opinion, this is an awesome, well-rounded speaker that you should check out if you're into a greenback-styled tone. The higher headroom also makes it a good choice to be used in 1x12" or 2x12" boxes with high powered amps. This speaker also remains more stable with higher gain distortion sounds than a usual Greenback. 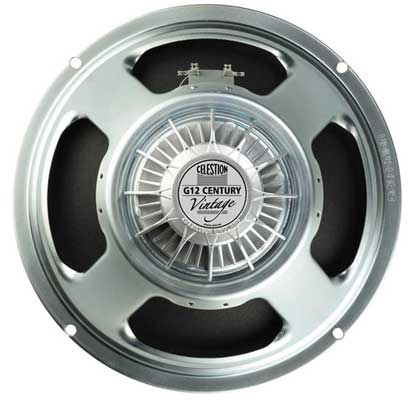 The Celestion Century Vintage is a Neodym Speaker which results in a weight of only 2kg. It has (for an AC30) a very high power rating (60W). Compared to the Blue Bulldogs and the Greenbacks it offers a very strong bass response, low mids and strong highs. On the typical AC30 crunch it sounds a little analytic but it has a great use for total distorted and total clean sounds. If funk or ska is you favourite territory you have to think about this speaker. It was first used in stock of the AC15s from the Custom Classic series as Celestion "NeoDog", which is in fact the same as the Celestion Century Vintage with a different label.
Sample Celestion Century Vintage (NeoDog): 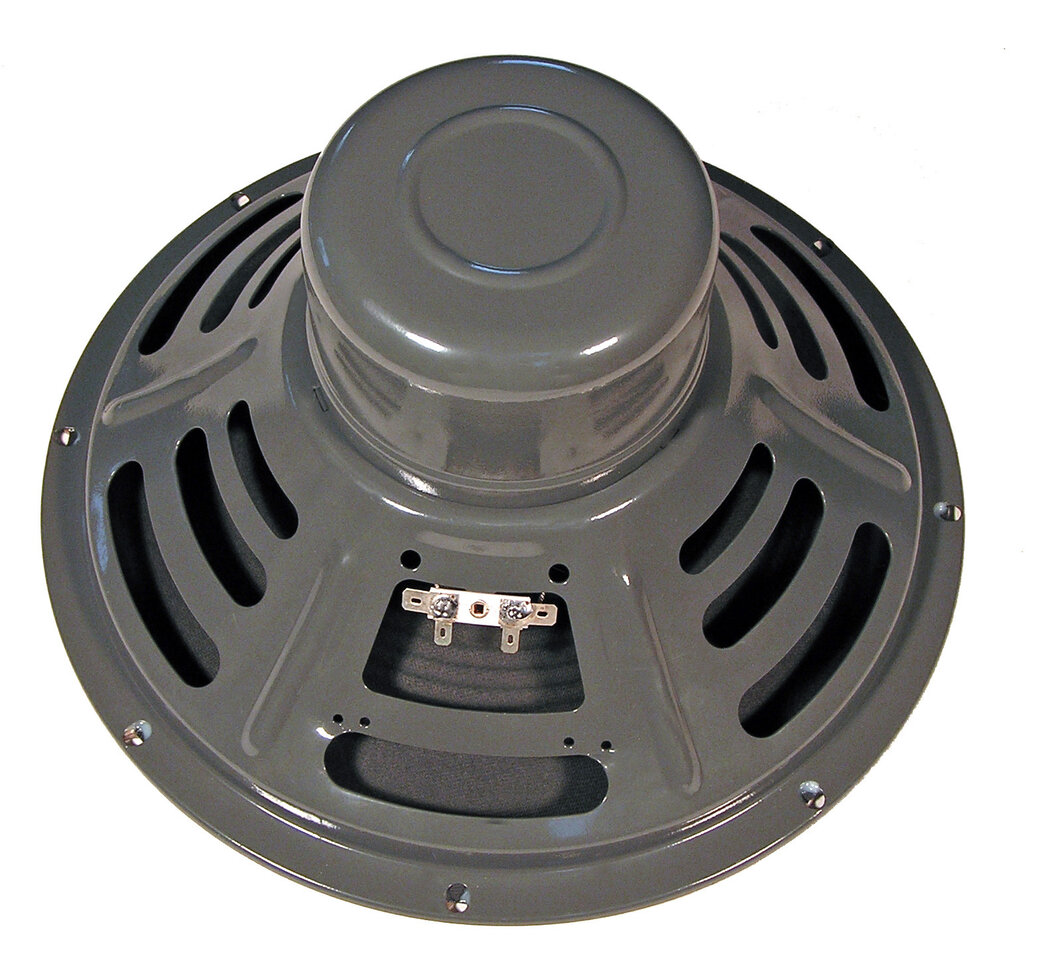 The Twinsound Cream Alnico Speaker is a cheap alternative to other if you like the Alnico sound. It has a power rating of 50W and sounds best if played loud. With it´s high efficiency it´s very loud indeed. Compared to the Celestion Gold it has less bass response but more mids and a little less highs. It sounds best on clean tones or blues style playing. If you need to make your AC30 louder (e.g. if you have a clean sound as basic for pedals) you may try this one. It has never been a standard speaker in the AC30s. It´s manufacturer takes it for marshall or fender styled amps.
Sample Twinsound Cream Alnico: 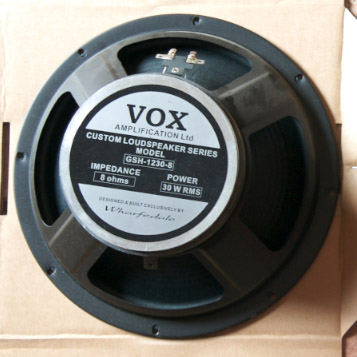 The Wharfedale GSH12-30 seems to be modeled on the Celestion G12H30. The style of their sound is similar. It hast a power rating of 30W with a huge ceramic magnet. What we could find out in the net, this speaker was designed by a man who worked for Celestion a long time. This speaker takes a lot of time to break in, probably the most I´ve seen. When not broken in they sound a little fuzzy but after that they got a classic rock tone and a harder attac than those alnico speakers. They are very balanced but have a clear bottom end. Very good on classic overdriven or clean sounds. It turn the AC30 towards a classic rock style amp away from creamy overdrive known when using the Blue Bulldogs. They came in stock with the AC30CC2 and CC1 of the Custom Classic series and are not available as new but you can find them in the extension boxes of the Custom Classic series or sometimes sold when someone changes them to the classic Celestion Blues.
Sample Wharfedale GSH12-30:

No love for Eminence speakers? How do the red fang and the private jack compare to the blue/gold and green?

I had some, but I can´t compare anymore.

I don’t really know how old these posts are, but when I used the “Tube Depot” link, the first page did confirm your “80 Watt” statement. I the entered the “Specification Link”, and “60 Watts RMS” is the rating detail. I don’t know the right, or wrong, but the site is definitely ambiguous. I just purchased a Celestion G12 Century Vintage 12″ 8 Ohm Neo Guitar Speaker 60W, and I believe the “Neo” in the description is an abbreviation for Neodymium Magnet Material. There is a close out deal, and I rolled the dice for US $99.00, and am blown away. So much so, that I just ordered another. An auto accident, and age have restricted my lifting limit. That’s my two cents. Love the site, if it is still current!

I owned the pricier G12 Century and a Neodog(that came with my AC30cc1)I prefer the Neodog because it’s more balanced sounding,it’s more affordable too.The G12 Century is a little louder but it’s mid/upper mid heavy and could use a little more sparkle and more low end response.
The claim that the G12 Century is better than the Celestion Blue is opinion,and one very few people would agree with.They are very dissimilar speakers so comparing the two is nonsense,the Blue is chimey but a bit fuller and creamier sounding,it has that nice alnico compression going on,the G12 Century has no compression,just lots of punchiness.

Actually, the “Neo” designation is applied because the Century Vintage uses a Neodymium magnet.

Incorrect info im afraid ,the neodogs are identical to century vintage i know cos ive got 2 of each.
the standard century sounds totally different ive had them as well

My AC30 has Wharfedale GSH12-30 speakers in it and they sound really good. I also have a Vox Essex 1966 Bass amp with 2 -12″ Vox Bulldog speakers in it (like new). I am wondering if anyone else has tried these speakers in an AC30, melding old with new. I may just go ahead and try them regardless. Sounds interesting to me.

I would like to make an 1×12 DIY cabinet for an AC30 head, primary for live usage.
I was thinking about Celestion Greenback 16 ohms (25 Watts), but, considering there will be only one speaker at the cabinet, maybe a Creamback 65 watts would be a better choice regarding power specs.
Unfortunatly, Alnico Blue are out of my budget.

Which speaker would you recomend for that purpose?

It depends on the style you are playing. I would prefer a Creamback for me because the Greenbacks are not my taste.

Any thoughts – good, bad or indifferent – to putting one each of Blue & Greenback in an AC30?

I have reload your this article, but the picture doesn’t show up. Is it have been deleted ? I want to get more info about Celestion G12M-65 Creamback, can you share me ?
Du musst dich einloggen oder registrieren, um hier zu antworten.